Emergency and other important phone numbers

Telephony in Switzerland was de-monopolized during the last decade of the 20th century. Before that, telephony and telecommunication services in Switzerland were provided by the government through the PTT ("Post, Telefon, Telegramm" - Postal services, Telephony, Telegraphy). The PTT has been divided into the postal service (Post) and the telecommunication services (swisscom). Both companies are now organized as a "Aktiengesellschaft" (public limited company), but the government still holds the majority of the shares.

In the area of telecommunication, there are now a number of private companies which also offer their services within Switzerland, including Orange and Sunrise.

In addition, there are some area codes not assigned to a particular geographical area, but which have special meanings:

Area codes in Switzerland (click on the image to enlarge): 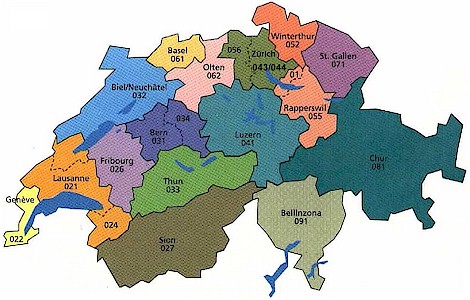 Note 2: The area code is now part of the local phone number. The geographic assignment will fade over the years because people will keep their phone number when they move even if they leave the area where the area code belonged to.

Cellular phones registered in Switzerland have their own area code. In the early days of mobile telephony, it used to be 086, now it is 076, 078 or 079 depending on the provider. Coverage depends on the provider. swisscom covers most of the country, the privately owned companies are building up their network, but cover at least the large cities, such as Zürich, Bern, Basel, Geneva and so on.